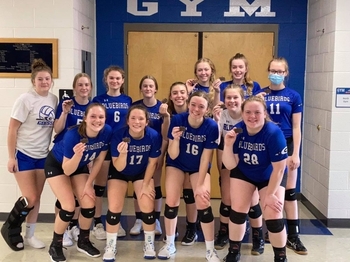 Goessel entered the Wheat State League tourney this year as the 4th seed and sought to make noise on a brisk October day at Centre High School.    A highlight moment for Bluebird fans was jumping out to a 10-1 lead v. 1st seed Little River (KVA Week 6 #2 1A Div I) and taking the first set in a stupendous contest 26-24.    Several players had season if not career days today, signaling to the Bluebird faithful not to count Goessel out yet in the post season.    The Blue took #1 seed Little River and #2 seed Herington to three sets and defeated all other (3) opponents in two sets to close out the day 3-2, good for a third place finish.

Against Elyria Christian to start the day, it was back and forth the entire 1st set against the scrappy Eagles in the annex gym.   Goessel’s hitters found the range today with Rachael Zogleman, Brooklyn Wuest, and Rylee Walker all notching excellent finishes to start.   At 11-11, Wuest caromed one that was last seen near Burdick and Goessel stayed up the remainder of the set.  Nearly in extra innings, the Blue finished it off with a nifty Guhr back set to Zogleman on the right 25-23.   In the 2nd set there were 6 lead changes; Goessel earned 16 in this one but was plagued with 4 service errors.   After a long rally, Guhr notched a nice push to knot at 7-7, Wuest killed, and Rylee Walker put the Blue up 9-8 with  a slam dunk in the middle.   Lyna Lehrman played lights out today and helped bring the Birds back with a left side close 14-15.   Zogleman and Walter blocked in the middle and Jaicee Griffin put up a HUGE down block to knot at 15-15.   It was back and forth until Walker finished a nice push to go up 21-19 and Goessel closed the 2nd set out on Eagle mis-hits to finish 25-21.     Bluebird serving, normally a key ingredient of Goessel’s attack, was streaky today as the Blue gave up too many on service faults.

In the highlight set of the day, the sunlight in the new gym was just right and two former assistant coaches were in the house.     Little River had just come off a win v. Elyria and appeared not to fully realize where they were.     Before you could say “Sebastian” it was 10-1 with only one of those points earned (Zogleman kill left side).    Goessel only earned 9 points in this one but each finish earned was well executed and ever so sweet.    Zogleman had four excellent swats, Wuest two and Walker 1.   Putting the ‘team from Little River’ on their heels to start is an excellent strategy, but the “giant” was awakened and earned 14 points in the contest.    Knotted at 24, LR was called for one of the few double hits of the day and then hit out again to close 26-24.   Little River made an unusual 15 errors in the first set.    Goessel’s defense played excellently in this one and the Bluebirds got the W despite 5 service errors.    Fans were incredulous at several of the jaw-dropping digs; congratulations Bluebird defense!    In the next two sets, LR made a total of 9 errors combined to put away the contest 14-25, 14-25.   In each of the sets, the team from Little River had 14 earned points with the Bluebirds making 11 errors in each.     Highlights included Zogleman hammering a hanging blocked shot so hard it registered on the Richter Scale at Kansas State and numerous other finishes by Z and W.   Lehrman also was credited with a couple of absolutely scintillating finishes.

Wakefield has not made too many appearances in the Wheat State upper tier tourney.   Teams participating this year were:   Little River,  Herington, Centre,  Goessel,  Elyria Christian, and Wakefield.    Participating in the alternative site event were:      Canton-Galva,  Peabody, Solomon, and Rural Vista.

Word on the street is that several other schools have made application to be part of the Wheat State League, so it will be interesting to see what happens going forward.

Against the Bombers, Goessel jumped to an 18-3 lead on 16 earned points including 9 aces.   Walker had two consecutive solo down blocks and Griffin notched one on her own.     Griffin socked one down right side, Lehrman hit from the left and Walker thumped one in the middle to finish this one 25-9.  Goessel earned 21 points in this one and the Bombers earned 2.    The Blue led start to finish in the 2nd set and got punches from Zogleman again to lead 12-6.   Emily Flaming notched an ace to lead 13-6 before Walker cruised two nice finishes in the middle off Guhr quick sets.    Serving and serve receive from Aimee Funk, Abbigail Fund, Logan Bryant and Ashley Rosfeld was steady and powerful today.    This one ended 25-14, with Goessel allowing the Bombers to earn only 3 points.

Goessel sought to avenge an early season loss to Herington (2A) and took on the Railers at 1:55 in the main gym.  Goessel could not shake off the lunch break, earning only three points in a disappointing start, 13-25.     Griffin got a nifty middle solo block, Lehrman slammed one down and Griffin punched one down in the middle.   The Railers were totally on track, committing few hitting errors, earning 16 despite committing 6 service errors.   In the 2nd set Goessel came out roaring, earning as many in the first three points as the team had the entire first set.   Walker and Lehrman got nice touches to fall and it was 6-1.    Nice defensive gets, great digs and fine passing took it to 12-5 before Walker got two consecutive huge rock solid blocks in the middle.  14-5.    Herington went on a 2-7 run to go to 16-12 before Zogleman found paydirt with a much needed crosscourt finish. Rosfeld put a smooth as silk ace down the line to go 19-12, but the Railers’ Rutschman spun out four consecutive unplayable serves to come back to 19-16.  Time out Bluebirds.     Once again Zogleman was absolutely perfect, missing the block on an excellent cross court zinger to lead 20-16.   Griffin comes as close to anyone to doing the “Page Hiebert stomp” and her rendition was on full display after a magnificent block. 21-16.   Wuest polished off a nice left side shot that (after Wimbledon review) hit the back line to lead 24-16 and Goessel notched yet another block to finish this huge set 25-16!   This was well played with the Bluebirds earning 17 points and only making 5 errors.      The third set was very well played as well, but a 0-4 run to start and 0-4 run in the middle put this one in the W column for the Railers.  Goessel looked like it might make a miracle recovery at 13-23, scoring its own 6-0 run to come back to 19-23, but it wasn’t to be and this one closed 19-25.     The good news in this one was that Goessel was able to put the ball away against a good team.    The Bluebirds made 10 errors, but had only one service error in the final stanza.

In the final match of the day, The Blue took on the homestanding Centre Cougars in the main gym at 3:15 pm for third place.  This location also required that an earlier season loss be avenged.   Behind a cacophonous crowd, Centre jumped out 2-9 before Rachael Z. quieted things down with her own ear-splitting right side shot.    Griffin got a nice finish on a circle rotation right side and the Blue dug in with great defense, passing and serving to come back point by point.      A 7-0 Bluebird run was another highlight of the day, and a tumultuous service ace took it to 15-14 and Goessel never looked back.      Guhr put a spectacular back set right in the wheelhouse for Walker and it was last seen headed toward the Flint Hills.   Zogleman was now totally on track and pounded one left side.  Another timely ace left it at 20-17, but the resilient Cougars knotted it back up at 21-21.     Who else to go to but Z and another crosscourt shot brought the house down, with the Goessel Bluebirds finishing 25-22.

What better way to close out play prior to sub-state than with a total team effort?   Looking pumped after a long day, the Blue jumped out to a 8-3 lead on punches from Lehrman and Zogleman.    Walker and Lehrman put up a double block that stopped a Space X rocket in its tracks.   Flaming got a nice left side kill to drop, then Zogleman found gold from the same spot to lead 14-8.   Beautiful passing and setting from Guhr set up three more perfect finishes for Z and L,. 19-12 and the teams traded salvos to 23-16.      Walker got a great right side wallop to wander in, but wait this one wasn’t over yet.   The Cougars growled and took it to 24-21 before Coach Guhr called time .    Out of the break, it only took a blink of an eye to go to #16 to close out 25-21.     Great finish Bluebirds!    Goessel earned 15 in the last set, but again allowed way too many unforced errors.

With a week to sharpen up details, the Bluebirds look like they are ready to keep pushing in the sub-state event.   Today’s effort was a team look, with everyone on the floor contributing.   A special nod to the defensive specialists who faithfully receive service and have done such a great job of putting the pass on the money for setter Kayleigh Guhr.    The Bluebird blocking today was outstanding; Goessel got caught looking a couple times on balls between players and serving was fuzzy,  but fans couldn’t find too much else to critique in a team that has come a long way.

Goessel will compete at the Canton-Galva 1A Div 1 sub-state next Saturday.   Teams scheduled to appear are:  Little River, Goessel,  Canton-Galva,  Fairfield,  Burrton and St John-Hudson. 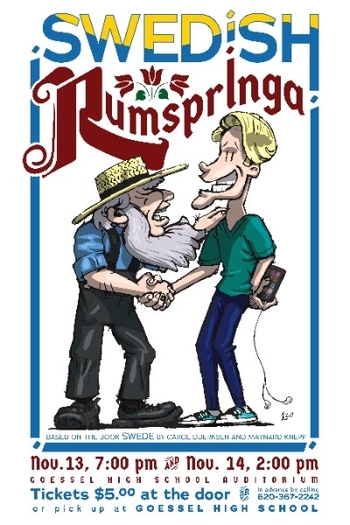 What's On the Menu?

Ever wonder who is doing concessions or what is being served at an upcoming event? Below is a list of upcoming activities and who will be serving what for the meal. Check back the day of each event for updated menus!

Board Agendas and Minutes

Board Agendas and Minutes

Click the link below to see the District Online Calendar... USD 411 District Calendar